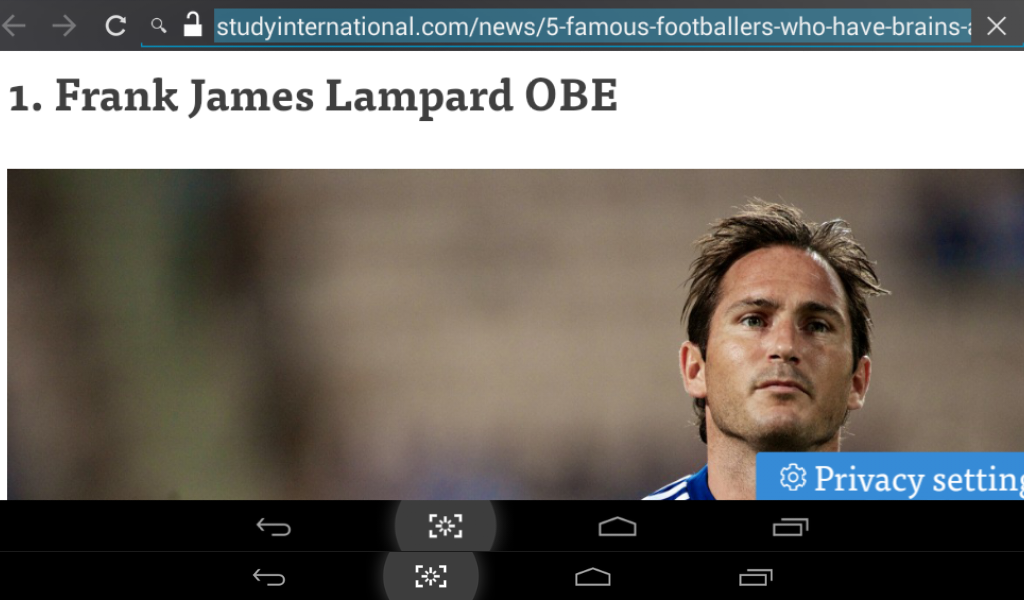 as well as talent

By The Manchester College | December 2, 2015 |@TheMcrCollege

“I never tried to hide the fact that my only goal is to be the best.” – Cristiano Ronaldo

With 3.5 billion fans across the globe, football, or the “Beautiful Game”, remains the world’s most popular sport. Aristocracy of the sport wear some of the most recognisable faces on the planet, but considering the majority are better known for their silky skills rather than their intelligence, it’s not particularly surprising many struggle to see them as our best and brightest.

But before you condemn the gods of the game, remember there’s a lot of pressure that comes in the gaze of the public eye, and you really shouldn’t believe everything you read in the papers. In spite of what people may think, the football pitch is rife with champions who show brains as well as brawn, so here are five footie brain-boxes who break the stereotypical mould:

Lampard began his professional career as midfielder for West Ham United, following in the footsteps of his father, Frank Lampard Sr.

Lampard Jr. played for Chelsea for 13 successful years, and despite signing to New York City FC in 2014, remains the all-time leading goal scorer for Chelsea FC.

A number of journalists and experts of the Beautiful Game consider Lampard one of the best midfielders of his generation, but he is also well-known for being one of the most intelligent footballers of the modern age.

In 2009, the record-breaking player undertook an IQ test with Mensa, one of the largest and oldest high-IQ societies in the world. Legend has it that Lampard’s IQ score was one of the highest marks the society has recorded in the history of its running. This, paired with the fact he’s in possession of 11 GCSEs – including an A for Latin (really, who’d have thought it?!) truly cements his status as an undercover genius!

Johnson is a British footballer who currently plays right-back for Stoke City Football Club. Like Lampard, Johnson began his career at West Ham United, spending time on loan at Millwall until being signed by Chelsea for £6 million in 2003. His career continued to blossom through a stint withPortsmouth in 2007, then one with Liverpool in 2009, before joining Stoke City this summer.

Johnson is well-known for his skill on the field, but what many people are not aware of is that at the 2014 World Cup in Brazil, while his team mates were soaking up the sun on Copacabana Beach, Johnson had his nose buried deep in college textbooks.

The Stoke star is a keen mathematician and before earning his degree, the player was known to dedicate two hours a day to his Open Universitystudies.

Speaking of his academic endeavours back in 2012, Johnson said: “I was good at maths at school but I didn’t really think of anything else but football. My teachers used to say, ‘You ain’t going to achieve anything.’ So I was thinking, ‘I’ll show you.’”

Clarke Carlisle is a former professional footballer who played for Leeds United, Watford, Burnley andNorthampton Town before retiring in 2013. The ex-player is considered one of the most important, and intelligent, in the English game.

Carlisle’s transfer helped Burnley return to the top-tier of football for the first time in 33 years, but many believe, however, that the star’s greatest achievement came in 2002, when he was named “Britain’s Brainiest Footballer” in a TV game show.

During his stint for Burnley, Carlisle became the first professional footballer to appear on the TV show Countdown, a British game show that focuses on word and number puzzles. The player made another unusual TV appearance in 2011 on the BBC panellist politics show, Question Time, where he voiced his concerns regarding the rise of racism on the pitch.

Carlisle soon became a fundamental player in the Kick It Out anti-racism campaign, and in 2012, played a major role in a football group that met with the British Prime Minister to discuss team racism and homophobia within the sport.

Champion footballer, TV puzzle whizz, role model and activist… it’s not all that surprising when you consider he has 10 A-grades at GCSE, studied Maths and Politics at A Level, and also has a degree in Professional Sports Writing and Broadcasting fromStaffordshire University.

Mata plays as midfielder for Manchester United, as well as Spain’s national team. Having won the World Cup, and being worth a sum way over £20 million, Mata’s career is fast-achieving greatness, but in 2011 when the player signed to Chelsea, he was making headlines for very different reasons.

When The Independent asked Mata about his unique views regarding education, the young scholar eloquently responded, “I don’t think football and studying are mutually exclusive. I am focused on my career but like to enjoy other things, like study for example.”

Juan Mata is walking, talking and highly-qualified proof that football and education can indeed go hand-in-hand. When a player employs his practiced intelligence alongside nimble footwork, he unleashes his potential to become unstoppable.

Moving swiftly off the pitch and into the realm of management, we present to you “Le Professeur”, Arsene Wenger. Well, to say we’re moving off the pitch isn’t strictly true, as Wenger began his football career as midfielder for Mutzig in 1969.

Wenger is most well-known, however, for his position in management; taking the helm of Arsenalin 1996, where he has earned the title of longest-serving manager, as well as the most successful in terms of major titles won. Wenger is renowned for his studious approach to football but also for his thorough and meticulous management.

The Frenchman also has an extensive and impressive résumé outside the world of football, achieving a Master’s degree in Economics from theUniversity of Strasbourg. He is also quite the globetrotter, having worked in France, Japan and England, and speaks seven different languages!

So, there you have it. Who said you had to choose between sports and your studies?!

If, like these players, you possess a passion for the game but also a dedication to your education then make sure you make the most of your combined talents! There are many opportunities to pursue both avenues at school, college and even university. Many institutions offer sports activities and teams that you can become involved with alongside your classes. One of these is The Manchester College in the UK, who offer an excellent Football Academy to 16-18 year old students looking to join in with the famous city’s passion for the game. Players train three times a week under the watchful eye of experienced coaches who have worked in professional football club youth academies including Manchester City FC and Wigan Athletic FC, and are able to benefit from first rate sporting facilities.

Students wishing to train with The Manchester College’s Football Academy can attend a trial once enrolled on their academic course. With seven teams playing a various leagues, the Football Academy caters for all levels of ability from those aiming to turn professional or semi-professional to those looking for a structured way to improve their football skills and fitness.

Find out more about the Football Academy, and how you can get the best out of both great sports opportunities and excellent academics, by visitingThe Manchester College’s website.