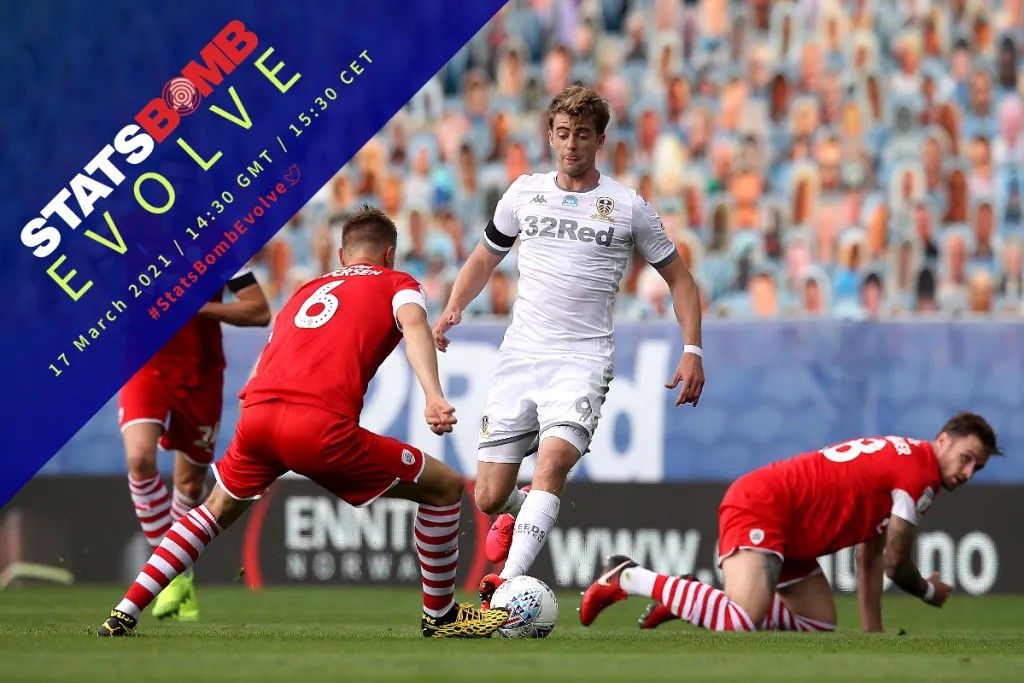 As football fans, we all know how exciting it can be to see a team close in on their opposition, hunting the ball as a ferocious collective, and seeing the composure visibly drain from the team in possession. We know what this looks like on the pitch, but what does it look like in the data? Time to investigate what contrasting out-of-possession approaches look like using StatsBomb’s pressure data

On March 17th 2021, we will bring you the latest innovations to come out of StatsBomb at our free online event StatsBomb Evolve, including upgrades to our current dataset and the launch of our revolutionary new data product StatsBomb 360. In the build up, we’re looking at some of the unique data points that already make StatsBomb Data the clear best in the industry, and the obvious choice for smartc clubs and analysts.

Given the topic, it would be different-for-different-sake to ignore Leeds. Combining chaos and coordination, Marcelo Bielsa’s approach to defending without the ball has drawn admirers for many years for its aesthetic, intensity, and its utility.

In a season where teams across the world are looking to conserve energy just to survive the condensed fixture schedule, Leeds have barely taken their foot off the gas, continuing to press and engage the opposition all over the pitch. Wherever the ball is, Leeds are going after it.

We knew that adding pressure data to our data specification back in 2018 would introduce significant context that was previously missing when evaluating a team’s approach out of possession, allowing for a deeper level of analysis and a more complete picture of the game. For example, here’s Leeds’ defensive activity map this season, relative to the rest oft he Premier League, without pressures included: 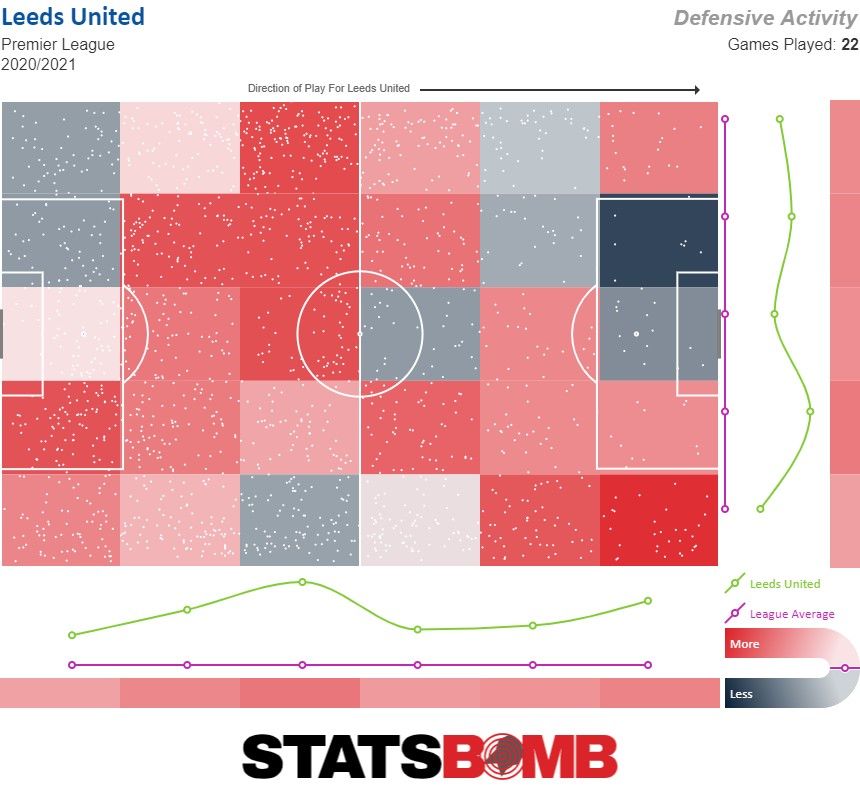 As you can see, it would suggest that Leeds are fairly active off the ball, but not significantly more than other teams in the league, particularly in the opposition half where they appear to be a shade above average.

Including pressures tells a different story. Now we can see an accurate reflection of just how active Bielsa’s side are out of possession.

The intensity of their approach to getting the ball back is a major outlier in the Premier League. There are plenty of other pressing sides but none quite like this, both in terms of the volume of pressures they’re applying but also the sheer number of turnovers they’ve forced the opposition into as a consequence. 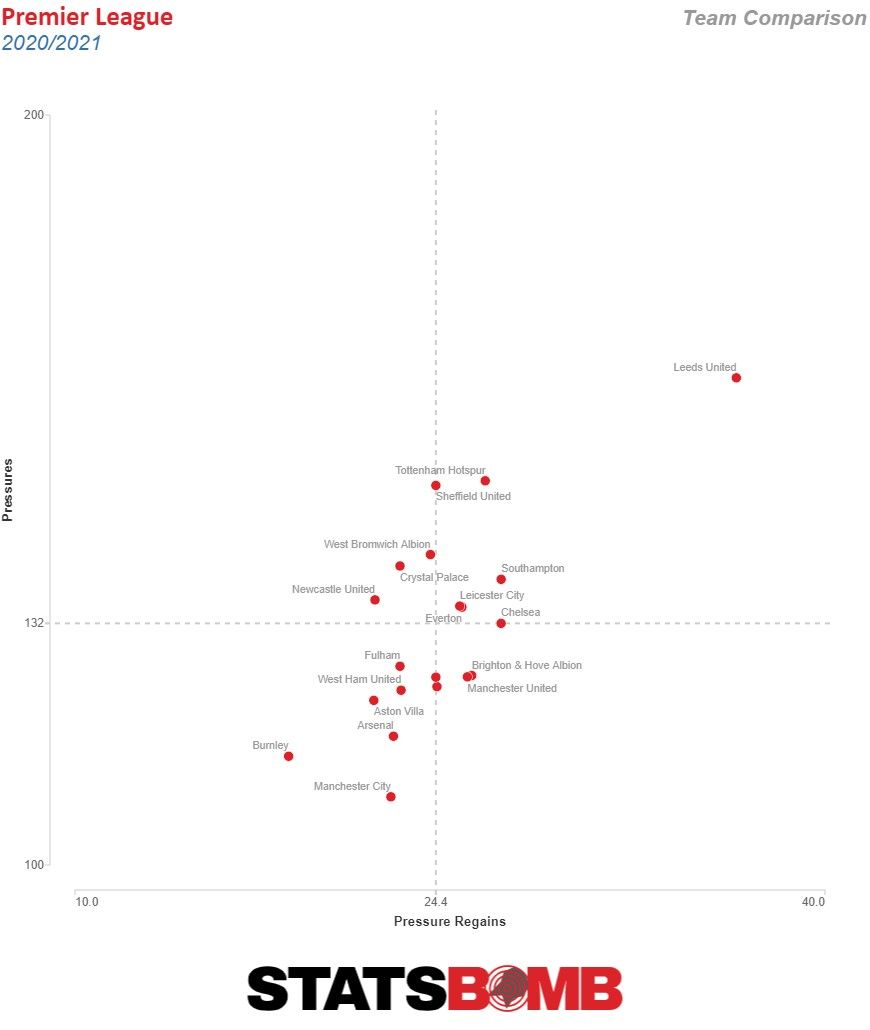 It’s quite literal to say that you barely get two seconds on the ball when playing Leeds. Nearly 1-in-3 of their opponents’ pass receipts are pressured, fouled, or tackled within two seconds of receiving the pass, as measured by their Aggression %. 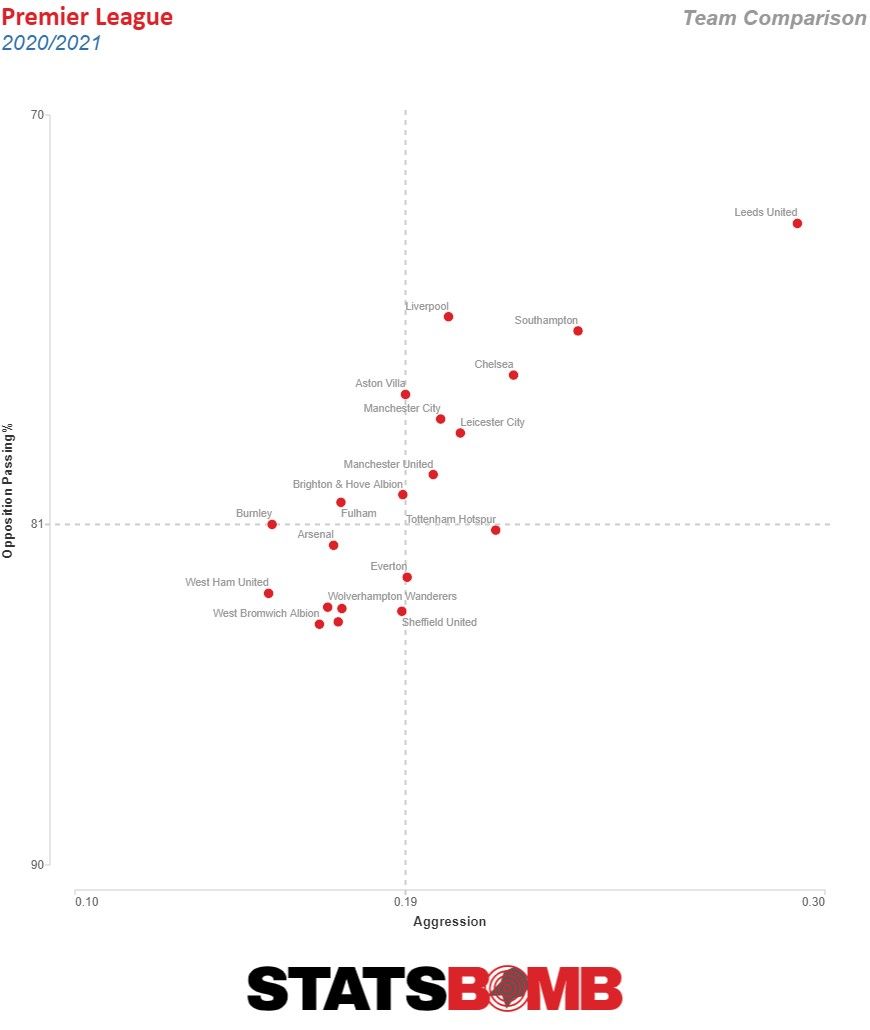 The beauty of a well-executed press isn’t just in forcing the opposition away from your goal, though, it has attacking advantages as well. Leeds have the most High Press Shots in the league: shots generated within 5 seconds of a turnover of possession. There are some drawbacks. Such a cavalier approach has led to Leeds being a slight outlier at the other end of the pitch. Inevitably the opposition have to come up with a method of beating or playing through such heavy pressure somehow, and it seems they've found most success on the break.

Committing so many bodies forward as both an attacking and defensive measure naturally leaves spaces to attack, and Leeds' man-to-man approach out of possession leaves vulnerabilities should their player not win their 1v1. A combination of beating them on the dribble and then attacking the space seems to have been the most effective way of combating Bielsa's press so far. But, with the side comfortably midtable in their first season back in the top flight, it’s inarguable that Bielsaball is leading to net-positive results.

Taking a different approach to their work off the ball is Burnley and Sean Dyche.

The Clarets have earned a reputation for being one of the best-drilled sides in the Premier League and their game plan out of possession is without doubt the predominant reason they’ve been able to establish themselves in midtable. Burnley had the ninth-best defensive record last season by goals conceded, and the seventh-best by xG conceded.

Given their notoriety for favouring a low block 4-4-2, you might be wondering why they’re featuring in an article about pressing. The reason? It’s where they decide to apply pressure, and the effectiveness of the block as a whole, that’s most interesting. 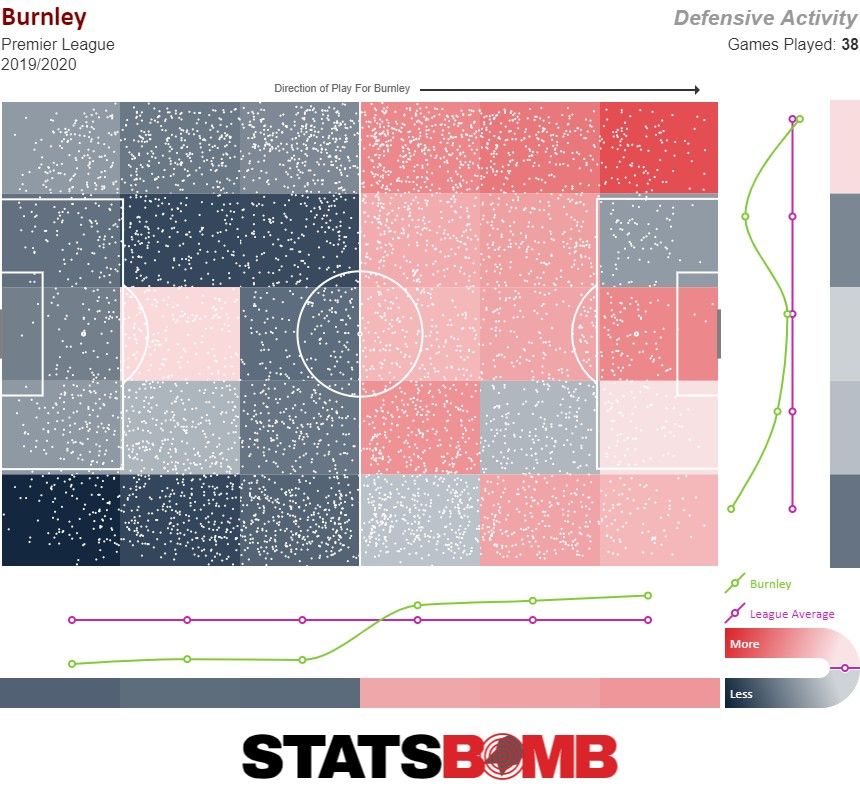 Essentially, Burnley run a specific press based on where the ball is.

From opposition goal kicks, Burnley squeeze right up and put their two forwards on the opposition defensive line, hoping to force the long ball where they know James Tarkowski and Ben Mee can win the aerial ball. The plan is to have squeezed the play so much that a Burnley player will get on the second ball from the aerial duel, or squeeze the opposition should they get on the possession. Burnley averaged 75 pressures in the opposition half per game in 2019/20, sixth-most in the Premier League, and as a percentage of their total pressures it ranked third. 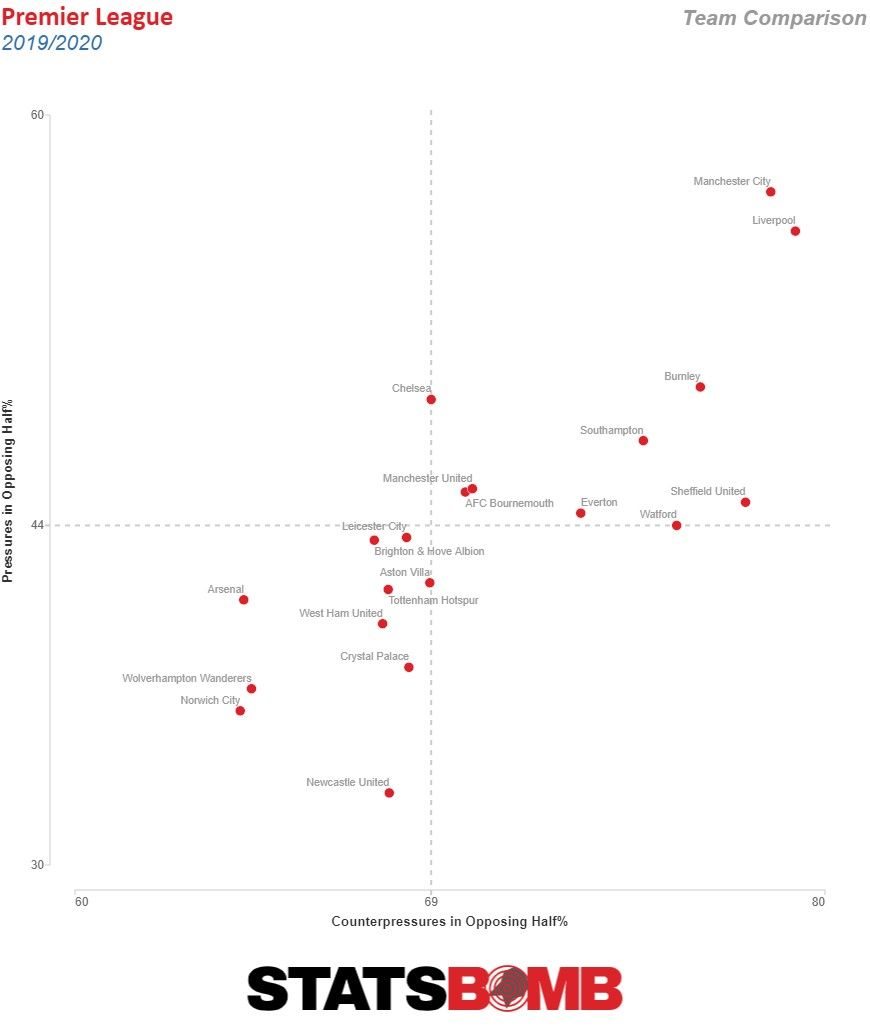 It’s only once the opposition have advanced into their half that Burnley form their infamous block, keeping spaces tight between the lines and forcing the opposition to try and play around them, rather than through them. 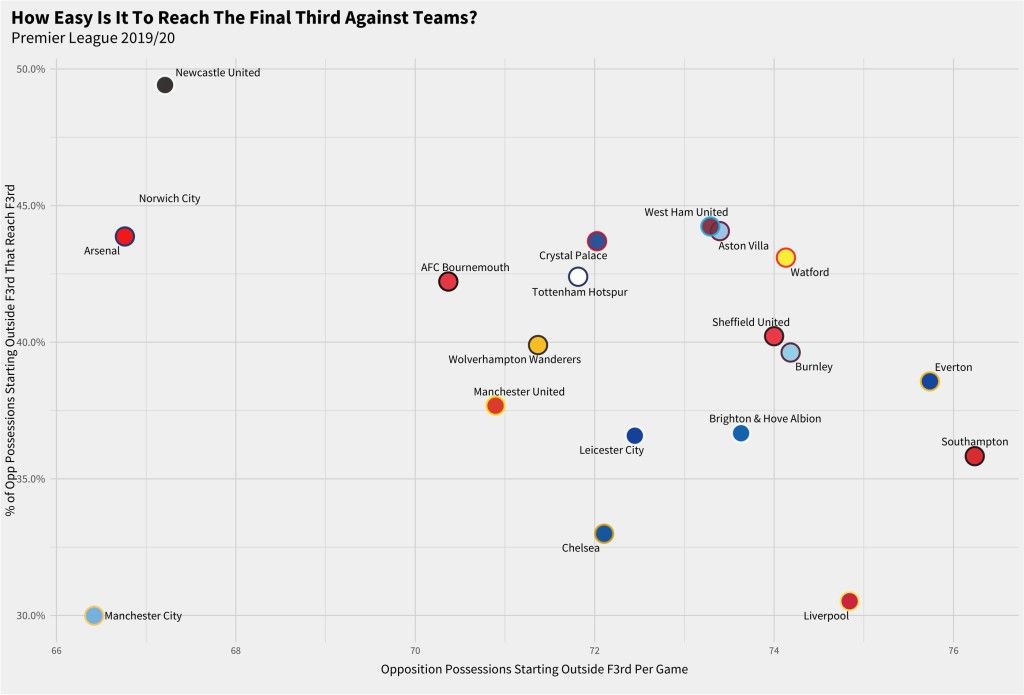 Should the opponent succeed in reaching the final third, the Clarets excelled at preventing them from creating quality opportunities, often applying pressure to the shooter or reducing the area of goal the shot-taker was able to aim for to hamper the chances of scoring. Two different approaches to out-of-possession, chaos and intensity versus immovable block, but Burnley and Leeds continue to succeed in their contrasting